SIGNED COPY WITH FREE BOOKMARK
please include your or beneficiary name in the order notes for a personalized signed dedication! 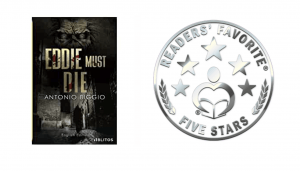 Thursday 28th October 1982. Hammersmith Odeon, London.
Iron Maiden are about to play in front of a sold-out crowd. This engagement is crucial for the band, who have just changed their lead singer and are trying to face the protests against their latest album, The Number of the Beast. They have been accused of having links to Satanism. A tragedy is round the corner: Liam and Rose, who belong to a religious sect, are also there, armed with enough explosive C4 to cause a terrible massacre.

Six weeks previously, the Thames returns the dead body of a journalist named Luke Wilkinson.
Everything found at the scene suggests suicide, but Inspector Andrew Briggs is suspicious. He decides to investigate on his own, but the deeper he digs, the more complicated the mosaic becomes. Two events apparently different, but connected by a thin thread. Who is the murderer? And who is behind the attack on the legendary metal band?
This page-turning thriller is rich of plot twists, intertwined with past and present on the London-Unites States axis.
Iron Maiden turn out to be the key to unravel the mystery, but how?